Pilates is a form of body conditioning that was developed by the late Joseph Pilates. His method, which he called “contrology”, focuses on strengthening the core muscles or “powerhouse”. Pilates teaches that the core muscles need to be strong and stable before working other parts of the body. His exercises incorporates strengthening and stretching simultaneously with a mind/body connection.

Pilates is meant to enhance your freedom of movement, strength and body symmetry. Every exercise is appropriate for all ages and all body types; even those with disabilities and injuries can look towards Pilates as a way of recuperation.

Over the years, Pilates has helped many through differing stages of rehabilitation. Injuries including – herniated discs, scoliosis, neck injuries, join replacement, broken bones, Parkinson’s and pre/post-natal issues – are ones we see the most, and are certain Pilates will help alleviate the effects of disability and/or pain. The benefits of Pilates are limitless. We’re motivated and inspired by everyone that walks in and leaves feeling rejuvenated, well and more powerful than before.

Through Pilates, you’ll have a refreshing mind-body workout. You’ll become acutely in tune with your own body, and learn how to control its movements. Proper breathing during Pilates is proven to reduce stress levels. On top of this, you’ll develop long, lean muscles and flexibility, perfect for reducing the risk of injury later in life. Lastly, you’ll find Pilates gentle, but challenging. It’s a great workout, and will certainly condition your body to where you want it to be. 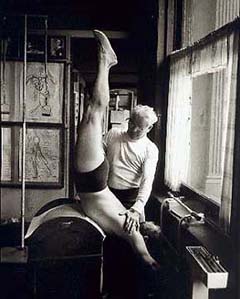 Joseph Pilates was born in Germany in 1883. He became interested in the human body with the encouragement of his physician and became an expert in anatomy. Joseph practiced many different forms of activity including gymnastics, acrobatics, boxing, yoga and Zen meditation. He believed that mental and physical health are inter-related.

He was in England when WWI began and was placed in a camp for German nationals. Using the knowledge that he gained from his studies of various exercise methods he began to develop his own method of movement he later called “Contrology”. He began training other men in the camp and ended up creating an exercise and resistance training apparatus for rehabilitation. The men that Joseph trained were the strongest and healthiest in the camp.

He returned to Germany after the war but soon decided to move to the US in 1925. He met his wife Clara on the trip there and they opened their own studio upon arrival to New York City near Madison Square Garden so he could train boxers. Soon, his method of Contrology became a staple of strengthening, balance and rehabilitation for the dance community. Contrology has carefully been passed on to generations of instructors who study and adapt Joseph’s ingenious original work and in honor of its originator the method is now known as – Pilates.

Pilates, the best thing I've ever done for my body after years of exercising. My lean body mass is balanced-proven by a body composition analysis. According to the medical professional performing this test, rarely ever seen!

I did not know how to take deep breaths, did not know what a core was. Patient and Consistent help from my instructor finally did it. I still have a ways to go.

I was the stooped, little old lady, with head projected forward until my daughter recommended Pilates. My instructor, Jessica, has corrected my posture and physical well-being 100%!